Last week after Buster Posey broke his leg during a collision at homeplate and more than a few people suggested the need for a rule change to protect catchers, the baseball media was buzzing.  Evan over at opinionofkingmansperformance wrote a great post about it and other memorable home plate collisions.  Evan mentioned the collision that is frozen into my memory between Jack Clark and Mike Scioscia.

Then, on my way into work on Friday morning I was flipping stations when I came across former Dodger pitcher Orel Hershiser being interviewed by Colin Cowherd on ESPNRadio.  You can listen to the entire interview via podcast linked here

Here is some of what The Bulldog had to say:


“Mike Scioscia was always known for blocking the plate you know? His nickname was The Rock and he would actually drop, block the plate before the runner even started his slide, the runner would then collide into his left leg, be stopped, Scios would receive the ball and then tag him out. And they always went after Scios and the number one guy who went after Scios was Jack Clark.  Jack Clark actually knocked him out at the plate.  Cause Scios had a reputation that you are not getting to the plate."
Cowherd asked Hershiser if MLB should implement new rules to protect the catcher and suggested it was the league's responsibility to protect the owner's number one asset meaning the players.  Hershiser replied:
“Well, it is if it becomes a rash of injuries, it is if it becomes an epidemic but I’m not sure with one specific incident you all of a sudden just knee jerk and write a rule.”
I'm gonna have to agree with Hershiser on this one.  It wasn't a dirty play that injured Posey and while collisions happen often at home plate, there hasn't been an epidemic of serious injuries to catchers.
Here's a picture of Clark knocking out Scioscia 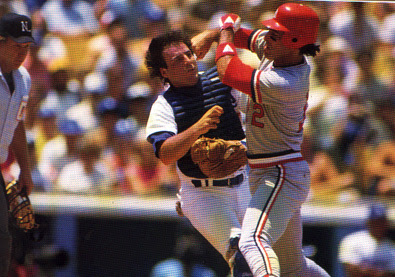 While doing some research and looking up some information, I came across a Sports Illustrated article by Bruce Anderson from October 7, 1985.  Here is Scioscia's take on blocking the plate:
"You have to decide if you're willing to stay in and block the plate or not, there is no in-between. You have to stay square with the runner so you're not exposing any of yourself to injury. Then you have to concentrate on catching the throw. On a high throw, you're like a wide receiver going over the middle to catch a pass. On a low throw, you have to stay low and protect yourself a little better."

Here is Scioscia's recollection of his collision with Jack Clark on July 21, 1985:

"Willie McGee was hitting, I think it was McGee. That whole day is foggy. Jack Clark was on first. McGee hit the ball to centerfield. Mariano Duncan was the relay. As I caught the ball and turned to make the tag, Jack was right there. That's the last thing I remember for a while."

Anderson wrote, Clark, moving at full speed, hit Scioscia on the face and head with his forearms. Scioscia was knocked unconscious. But he held on to the ball. He was removed from the field on a stretcher and taken to a hospital for overnight observation.

Scioscia - "Leave the game? I left the world for three minutes."

Back in the early 80's my favorite Dodgers were Steve Garvey, Fernando Valenzuela & Mike Scioscia.  I'm still bitter that he never got the opportunity to manage the Dodgers after managing in triple-A Albuquerque.  He is another Dodger that got away.

True to the Blue!
Posted by Dodger RAMblings at 2:41 PM